Help for Heroes (H4H) is a UK Charity which provides direct, practical support for those wounded in the line of duty.

Before H4H was founded in 2007 by Bryn & Emma Parry, they asked Innovative to design a website that would help raise £50,000 to build a swimming pool at Headley Court Rehabilitation Centre. That initial fundraising target was soon stretched to £8 million and, since October 2007, Help for Heroes has now raised a staggering £200 million for our wounded.

Innovative quickly formed a solid working relationship with Help for Heroes, through mutual trust and common goals. We invested time into understanding their needs, both as a working environment and as a charity. From the start, we took a ‘nothing is too much trouble’ approach, constantly developing the charity’s ideas with a proactive, visionary attitude.

With a huge amount of public support for our wounded – and a constant national focus on the troops in Afghanistan and Iraq – the speed of the charity’s growth has been phenomenal. Maintaining, designing and supporting all online aspects of the charity required constant flexibility and proactive development of the website’s technical elements. The main goal of the website was to encourage donations to the charity and also increase the traffic to the online store, which subsequently covers the charities administration costs from the profit it makes.

Since the start of the project in 2007, we developed solutions to meet the ever growing requirements of the fastest growing charity in the UK. Our team designed and developed the Website which received over 200,000 visitors per month. The Online Shop which had a turnover of over £1million a year. The Events system which managed over 500 events per week and developed a social network called HeroNet. We worked with team at Help for Heroes to manage the site’s content daily, ensuring it was up to date and providing a constent feed of news for the supporters to follow the charities progress. We were very proud to be a part of the opening for the Headley Court Rehab Centre, the building which was the first goal for Help for Heroes back in 2007.

In 2009 due to the overwhelming growth within the charity we took the opportunity to redevelop the website’s information architecture, and with the increasing amount of site content has proven a structure which is still easy to navigate. The addition of a static donation button, which appears on the right hand side of the screen at all times, means that supporters can choose to donate at any point in their visit.

The Help for Heroes website receives an average of over 200,000 visits per month, and Innovative are proud to have helped the charity reach a staggering fundraising total of £127 million during the first four years from 2007-2012. 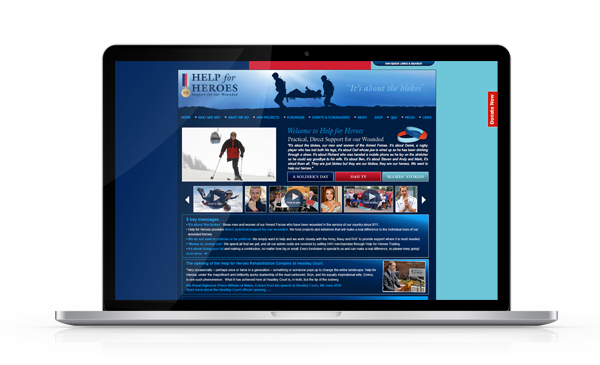 Our team designed and developed a stunning website for the charity which was engaging and highly visual with a key focus on providing the visitor with new about the charity and an easy path to donate.

Our team developed the eCommerce shop using the Interspire platform ( Now BigCommerce ) and developed a bespoke integration with their back office accounts software, IRIS Exchequer. The eCommerce shop regularly received over 100 orders per day.

Our team designed and distributed eNewsletters using MailChimp for both the Charity and the Trading company. Promoting Events, Product Launches and seasonal special offers.

Creating a highly visual image for the charity was very important, our creatives created stunning visuals for the header banners on the shop, posters for events and unique graphics on all key web pages to really engage with the visitors.

Innovative Consultancy have provided the IT support for the whole Help for Heroes campaign. I really can not praise their team highly enough. They have helped transform an idea into a massive national brand and much of that success has come from their innovative use of technology. The website is appealing, beautifully designed, easy and fun to use. I honestly can not recommend them highly enough.

I wanted to write to be able to thank you for all your hard work in support of the Help for Heroes campaign. Your efforts in putting together the most excellent website are really very much appreciated, not only by Help for Heroes but by all those who have offered their help and money to the charity – the website is undoubtedly one of the main strengths of the campaign.

To get a functional, beautiful and effective new website for your business, get in touch today!
Our friendly team will talk you through your options and set you on the path to online success. Get Innovative

Innovative is a digital marketing and web design agency, formed in 2005. We’re located in the beautiful New Forest, near Salisbury, on the edge of the Hampshire – Wiltshire border. We specialise in building stunning Wordpress websites and eCommerce sites for companies throughout Hampshire, Wiltshire, Dorset – and beyond.